As mentioned in my last post, I have a new publication out – an entry in the Wiley-Blackwell Encyclopedia of Medieval Literature in Britain, on the Vespasian Psalter, the manuscript now shelved as London, British Library Cotton MS Vespasian A. i.  So how better to celebrate this than by dedicating a blogpost to the manuscript – with some images, something which I obviously couldn’t include in the encyclopaedia?

The Vespasian Psalter is particularly special because the ninth-century gloss is the oldest surviving copy of any part of the Bible in English.  This begins on fol. 12r, in Psalm 2 verse 4 (the opening of the psalter has now been lost).  So these are the earliest surviving words from an English Bible: ‘se eardað in heofonum bismerað hie’.

The additions to it were written at the monastery of Christ Church, Canterbury, by the talented scribe Eadwig Basan (also seen in another psalter, Arundel MS 155):

But it’s not all about the text!  The manuscript is also known for this illustration of King David and his musicians:

This is the only full-page miniature now surviving from the original manuscript.  However, the psalter has some of the most stylish opening initials of any Anglo-Saxon manuscript I am familiar with. 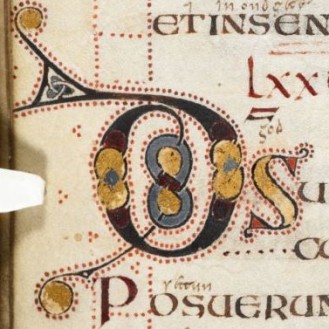 Between the psalter and its additions, we can see the difference between the uncial script in use for high-quality Latin texts in the eighth century, and the Caroline script which was used three centuries later. 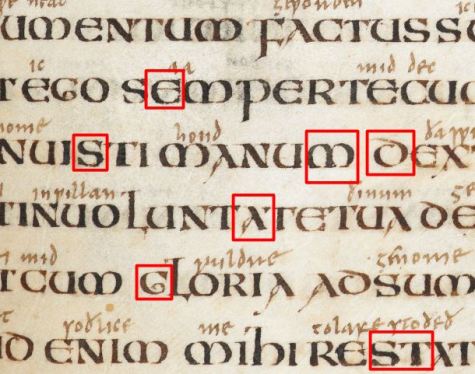 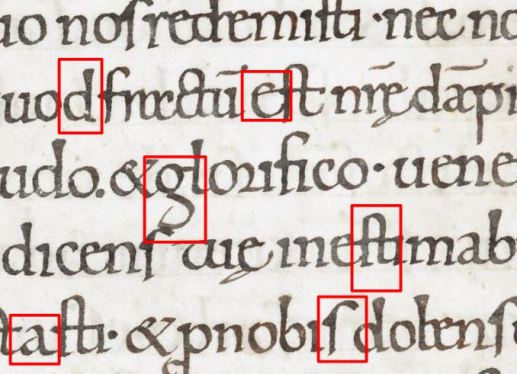 These two images show the differences between the two scripts, particularly in the letters A, D, E, G, M, S, and the ST ligature which is used in the Caroline text.

I originally got to know the manuscript, not for the gorgeous psalter, but for these eleventh-century prayers.  These include the popular confession ‘Deus inaestimabilis misericordiae’, but also, as mentioned in an earlier post, a group of long prayers to the Holy Cross which I have not seen in any other pre-Conquest sources, though one of them can be found in a twelfth-century manuscript.  This makes use of phrases from the hymn ‘Pange, lingua’, written by Venantius Fortunatus for the receipt of the relics of the True Cross at Poitiers in the sixth century.

Indeed, he is your most holy fruit, sweet wood, sweet fruit, sweet nails, sweet weight, bearing a sweet burden.  You happy one alone bore the price of the world …

I hope you have a wonderful time exploring this manuscript.

This site uses Akismet to reduce spam. Learn how your comment data is processed.